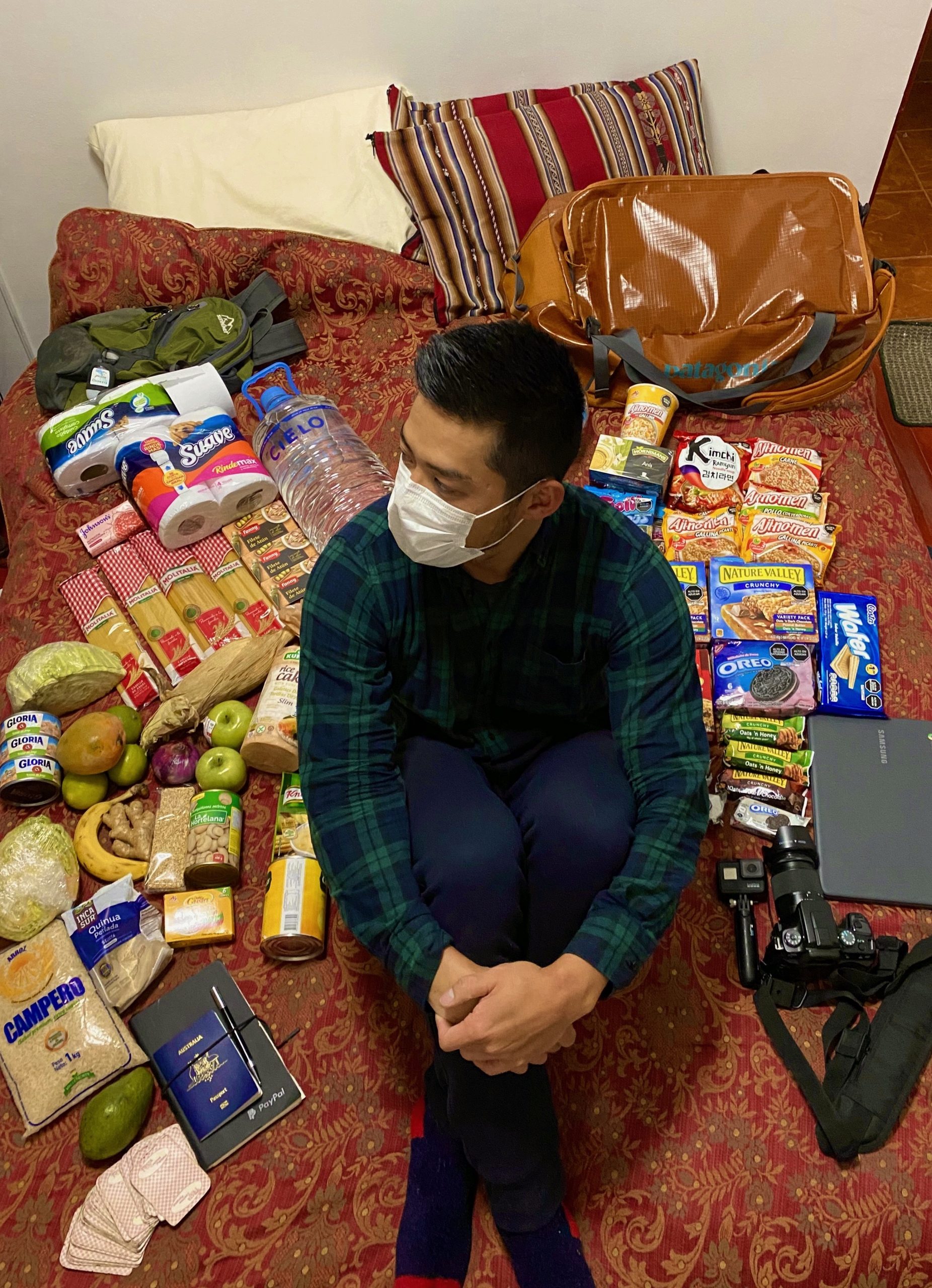 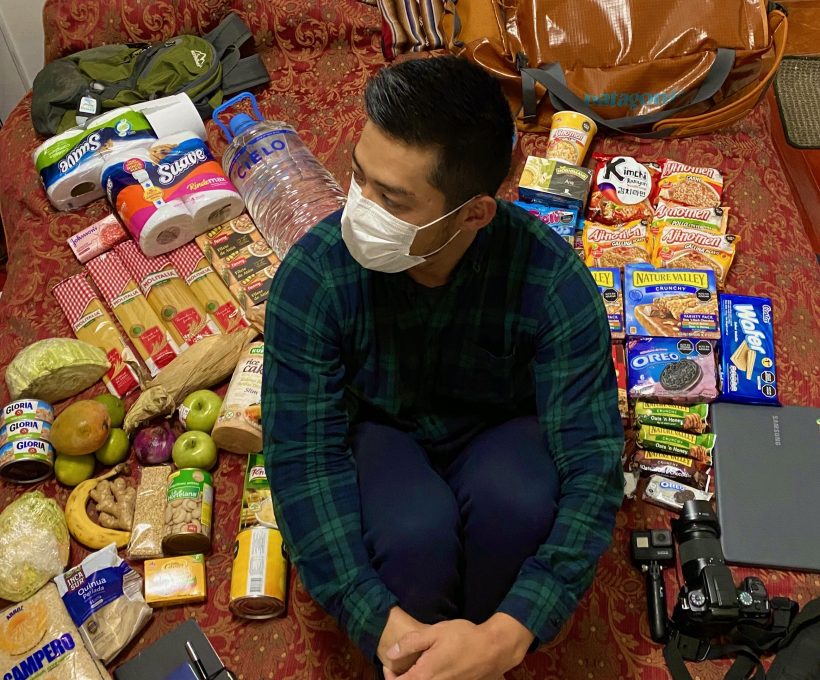 Before I get started on my ‘Stuck in Peru’ post, I’m an Australian citizen who’s been working and living in New York for the past two years. My partner is an American citizen, and I wish nothing more to get back to him. I realize it might not happen for quite some time. Australia will always be home, but my life is in New York. I’m caught between where my heart is and where I’ll likely get the support to get out. As I write this post, I’m at the point where I’m desperate for any option out. Even if it means I won’t see my partner for another 3 – 6 months.

It was meant to be a trip of a lifetime

As I shared with some of you in my earlier post. It was meant to be a trip of a lifetime, traveling through South America and taking the opportunity to take a moment for myself and reflect on my journey thus far. It was meant to be my ‘Eat Pray Love’ moment, but no one could have predicted that I would end up stranded in a country in complete lockdown. Borders closed off to the world, enforced curfews, military patrolling the streets, and confined to your own four walls. This is the story of how I wounded up being stuck in Peru.

A month had past since I left New York

It’s been more than a month since I packed up and left New York to embark on this trip. Prior to leaving, the Coronavirus had only just made headlines coming out of China. At that time, it hadn’t reached the severity of being called a pandemic by the World Health Organization (WHO). There were many unknowns, but it felt foreign and seemed somewhat out of reach. It had barely reached the borders of the states nor were there any confirmed cases in New York. The only place it hadn’t reached was this side of the world in Central to South America.

It was as if it was any other ordinary day

I began the first leg of my trip to the incredibly beautiful country Colombia. Words cannot do it justice, but I was utterly captivated by its history, culture to the food and its people. As I traveled through Colombia, it was fairly normal (aside from the odd stares as you don’t find many Asians on this side of the globe). Everywhere I went, people were living their daily lives as if it was just another ordinary day. The reality didn’t hit until I left Colombia for Ecuador; it was the day before my departure that Ecuador had its first confirmed case.

I arrived at José Joaquín de Olmedo International Airport in Guayaquil. They were checking each passenger’s temperature as you boarded off the flight. It was confronting to say the least, having your temperature checked by someone in a head to toe hazmat suit. Even though I knew I was going to be fine, there was still this sliver of doubt that made me think, ‘please pass, please pass’.

The news spread across Ecuador

I spent most of my time in Ecuador by a small hippie surf town 2 hrs away from Guayaquil – it was somewhat a bubble from the outside world. The news of the Coronavirus outbreak had spread across the nation. As a result, people were taking normal precautions with washing your hands and hand sanitizers. It didn’t seem like there was anything to be feared than as if it was the bad case of the flu (I would soon find out how wrong I was).

It was ignorant to think anything less

As the news of the raising death toll started pouring out of countries, being hit hardest like Iran, Italy, and the rest of Europe. It was ignorant to think it was just the ‘bad case of the flu’ – it’s a much more serious matter. My travels were starting to concern my partner. Bless his beautiful soul, he warned me to be alert of any news or developments related to the outbreak.

The Government’s advice was to ‘travel with caution’

As the situation continued to escalate and the pandemic spreading further across the globe. I made sure I kept a close eye on the situation; following any updates on Smarttraveller.com and guidance from both the American and Australian embassy. At that moment, there wasn’t anything to be alarmed. The travel advice for the countries in South America was at most “travel with caution’. The caution at the time was about petty crime in some touristic areas – a fairly reasonable risk to undertake.

After spending over a week, I continued on my trip and left the little oasis for Lima, Peru. Aside from the notable longer immigration lines due to the added precaution of temperature checks (By now, it had seemed routine and a necessary precaution). The city was either unaware or utterly unphased by the Coronavirus. There was this false image presented before you as people went on with their daily lives and going to the beach. On the last day in Lima, I even went out on a day tour to swim with sea lions. There was no indicator that this city would soon be under siege by the pandemic.

The day of the announcement

Things only started to escalate as I arrived in Cusco, a couple of days before the announcement of the lockdown. I will never forget that Sunday day, March 16. I had set off in the early hours of that morning to begin my trek up to Humantay Lake. It was around 7 pm by the time I got back to the hostel. As I got to my room, I immediately crashed due to exhaustion and the altitude. That very same night, the Peruvian government decided to shut all its borders; land, air, and sea for 15 days. It was to take effect the following day, starting midnight March 16. We had less than 24 hours – mind you other neighboring countries like Chile had given at least 3 days for tourists to leave the country.

I’ll never forget the morning after

Like many others, I woke up to find out about the news. I remember that morning vividly; I was so excited as I had planned to head to Machu Picchu that day. Just as I was about to leave the hostel, I checked Smarttraveller. To my complete shock, it had updated with the news of the lockdown.

I immediately rushed straight to the airport. As I arrived, there were military and armed police guarding the front gates of the airport. They weren’t letting anyone in unless you had a boarding pass. It was complete chaos as people were breaking down in tears. It felt so surreal as if it was out of some apocalyptic movie.

Making any attempts to get out before the border closed

I sat outside the gates of the airport from 11 am to 6.30 pm, trying to get on any flight out of the country before the border closed. I wasn’t successful despite countless times calling my airline to change my return ticket (I called them twice, each time waiting at least 3 hrs before I spoke with an agent. Both times it had ‘coincidentally’ hung up on me as they were in the midst of processing the change.)

Panic sunk in and I was desperate to get out

The panic started settling in as the day went on, and there were fewer and fewer flights left. I was getting desperate; trying to buy a ticket out to anywhere, even back to the capital. Every time a ticket became available, there was a glimmer of hope but it was met with disappointment. I was either getting booted off the site, or the tickets were no longer available. Others were also left stranded as they had brought flights the night before but only to find out they were canceled as they arrived at the airport.

I realized I wasn’t going to get out

As it started to get dark, the reality started settling in that I was going to be stuck in Peru. I realized I wasn’t going to get out before the lockdown took effect. I resorted to seek shelter – I tried going back to my previous hostel, but by the time I had returned, they had booked out. Left scrambling to find a new place, I was fortunate enough to find another hostel that was willing to take me in. Most hotels, restaurants, bars, and shops had closed.

Being prepared and stocking up on food and water

As the thought of being stuck in Peru became a reality. Instincts kicked, and I rushed straight for the supermarket to stock up on food and water. Luckily people aren’t panic buying or hoarding; people are calm and only brought the essentials. Unlike back home, toilet paper isn’t a scarcity, and you didn’t have to punch someone in the supermarket aisles just to get your hands on a roll of toilet paper.

Deep down I knew the truth – I would be stuck here

Still, in shock and disbelief, I called it a night. Praying and hoping that the Peruvian government might change its mind and let those stuck in Peru leave. But deep down, I knew the truth, and the truth was I would be stuck here by myself.

It’ll change the course of history as we know it

Within the short span of a couple of weeks from when I left New York to arrive in Cusco, the Coronavirus or also known as COVID-19 has spread rapidly across the world. Now confirmed in 201 countries with a total of 512,701 confirmed cases and 23,495 confirmed deaths (the number continues to rise)*. Not just the thousands stuck in Peru or elsewhere around the world. The impacts of the Coronavirus will affect everyone and change the course of history.

Follow the many other ‘Stuck in Peru’ stories by searching #stuckinperu. These are mothers, fathers, brothers, and sisters who by no mean chose to be in this situation. We need your help to bring home the thousands of foreigners stranded in Peru. #bringthemhome

Opinion Piece: Why saying goodbye is the hardest thing you'll do when you travel?

Mental health during the coronavirus pandemic